From Vienna airport to our department

CAT is a direct express train service linking the airport to station Wien Mitte. From there, the university is 2 stations away by subway line U4. When using the CAT service, you can already check in at the train station Wien Mitte for certain flights when departing from Vienna. A cheaper standard train connection between VIE and Wien Mitte is also available: ÖBB train line S7.

For train connections to Vienna, consult the time table of the Austrian federal railway company (ÖBB). There are direct services to many central European cities.

If you are travelling by train you will arrive either at Westbahnhof (Vienna west: trains from Germany, Switzerland, Hungary) or at Vienna main station / former Vienna Central Station (Südbahnhof) (trains from Italy, Slovenia, Slovakia, Czech Republic, Hungary).

You can reach the department with the following lines:

When arriving by underground at Karlsplatz take the exit Resselpark and cross the park - the University is opposite the subway exit.

When arriving with the tram lines 62 or 65 at Resselgasse walk to Resselpark. Karlsplatz No. 13 is to the right hand side.

The tram line J takes you to Bösendorfer Strasse and the bus line 4A to the top side of Karlsplatz. Cross the Lothringerstrasse and the Resselpark.

For fares and more information please see the tourist section of Wiener Linien. 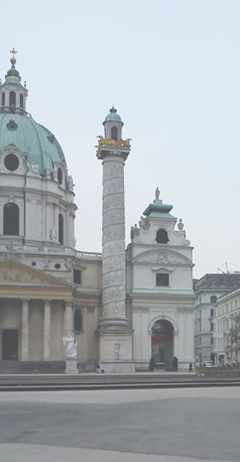